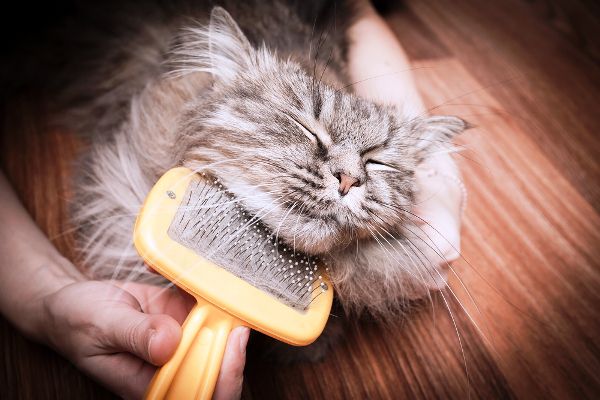 Cats use a characteristic language that helps them communicate with us, and also with other cats body language. Unlike people, in felines the transmission of information is carried out through body language, vocalizations or the emission of odors.

Cats spend much of their time rubbing their heads, bodies, and tails. This behavior is aimed at impregnating us with their scent to delimit and identify what they understand as their property, and also to ward off any other feline.

Another type of marking comes from the action of scratching on walls or furniture, so it is advisable to have a scratcher from when they are small. This behavior, as in the previous case, arises from the need to impregnate the territory with its characteristic odor, and leave visual signs to delimit its circumscription.

Cats have highly developed ears and are capable of capturing sounds that humans cannot hear. Their ears have the peculiarity of having a certain mobility that helps us predict their behavior and learn more about their language. They adopt different types of positions that reflect their moods.

If your cat’s ears stay straight and forward, he is telling you that he is attentive. If, on the contrary, he positions them to the sides, it means that he is angry. Sometimes, they usually make rotating movements with them, which indicates that they are inspecting or analyzing. Finally, if your cat keeps its ears down, you need to be extremely careful and do not bother it, because in this state it could carry out some type of aggression.

Your cat’s eyes can also explain her different moods. For example, spherical and dilated pupils warn that your pet is nervous and scared. On the contrary, contracted pupils, half-open eyes, with slow movement of the eyelids, indicate that your cat is calm and happy.

Language of cats through meows:

There are  different types of  cats communicate with you and with other cats.

By purring they indicate that they are comfortable. Meows are different meaning ranging from the need to capture your attention.If you hear a snort, you should understand that it is trying to frighten away from its territory those it considers enemies, whether they are strangers or other pets.

The Complete Guide to Buying Supplements for Dogs: Everything to Know

Pregnancy and heat of cats

How to Choose the Perfect Long Cat Plush 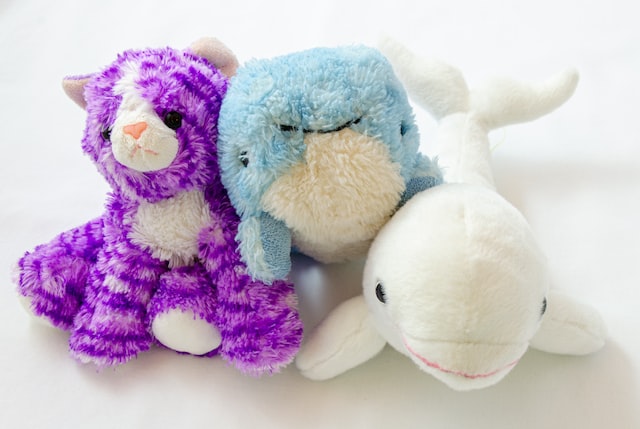 What is a long cat plush?

Well, let me tell you. A long cat plush is a stuffed animal that is specifically designed to be longer than it is wide. They are usually made of soft materials like cotton or polyester kawaii plushies and have a variety of different designs. Some of them even have special features like music boxes or LED lights.

So, why would you want to get a long cat plush for your child?

There are actually quite a few reasons. For one, they are incredibly cuddly and huggable. Kids love to snuggle up with their stuffed animals, and a long cat plush is the perfect size for them to do just that. They will also love the fact that they can use it as a pillow when they’re tired or want to take a nap.

Another great reason to get a long cat plush for your child is that they are very durable. Unlike other stuffed animals that might fall apart after just a few uses, long cat plush are built to last. Your child will be able to play with their stuffed animal over and over again without having to worry about it falling apart.

Finally, long cat plush make great gifts for kids of all ages. If you know someone who loves cats, then this is the perfect gift for them. Even if the recipient doesn’t have a lot of experience with cats, they will still appreciate the thoughtfulness of the gift.

How to choose a long cat plush for your kids

So, now that you know what long cat plush is and why you should get one for your child, let’s talk about how to choose the right one. The first thing you need to consider is the age of your child. If they are very young, then you will want to choose a stuffed animal that is soft and cuddly. If they are older, then you can go with something that is more durable and has more features.

Next, you need to think about what kind of design you want on your long cat plush. There are literally hundreds of different designs out there, so take some time to look through all of your options before making a decision. You can even find some that come in multiple colors or have special features like music boxes or LED lights and mushroom plush. Just make sure that whatever design you choose, it’s something that your child will love.

Finally, don’t forget to factor in price when choosing your long cat plush. Stuffed animals can range in price from just a few dollars up into the hundreds, so it’s important to find something that fits within your budget. There’s no need to break the bank when buying a gift for your child, but at the same time, you don’t want to skimp on quality either. With so many great options out there, there’s no reason why you shouldn’t be able to find something perfect for your little one.

Benefits of having the best dog breeder website design. 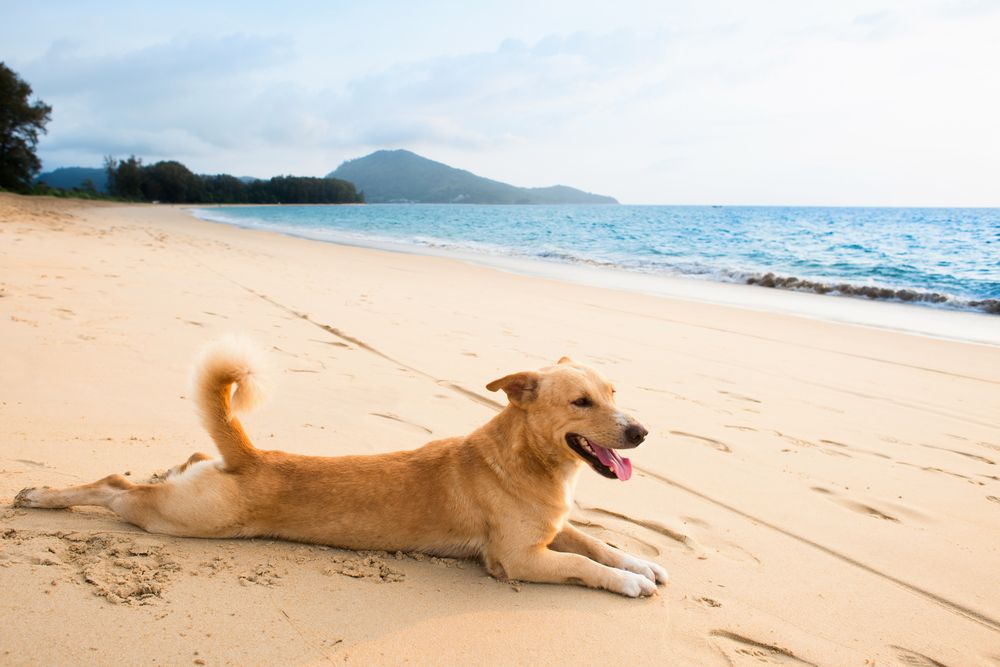 The creation of a website is within everyone’s reach these days and that is why it is necessary to think of interesting design ideas before starting. There are currently thousands of concepts to exploit and some are more common than others. If you are an animal lover and want to stand out from the rest of the online sites, then why not hire a professional company to make an attractive dog breeder website design.

Since the appearance of social networks and more particularly Instagram, you can realize the importance of animals in people’s daily lives. The various influencers show their dogs and cats through publications or stories and this arouses the interest of the public enormously.

Breeder designs know how much your project dog breeder website design is important and they are ready to work closely with you, from the beginning of the design of your website, to the final product. Their team is made up of professionals with the necessary expertise to carry out your ambitious projects. They will work according to your expectations and your needs while respecting the previously established deadline.

Without a doubt, pets are members of the family and the dog is still man’s best friend. For this reason, his care and needs are as important as those of any other person. More and more men and women have become real activities for the protection and rights of animals. Pet shops, veterinarians, shelters, and dog training are no exception to the current trend: they increasingly have and need a greater presence on the Internet to promote themselves, exchange ideas, and live life. Having a dog website is mandatory to reach consumers correctly and giving them the opportunity to make purchases in an online store has become a requirement. People want to shop via their mobile phones, tablets or computers for a very simple reason: it saves an incredible amount of time. Your pet website must comply with the following standards currently required by Google:

• 100% integrated to social networks and have the possibility of sharing content in the profiles of each client or potential client.

• A dynamic corporate blog, with suitable and original information.

• Active social networks and oriented not only to the dissemination of information but also to customer service.

The competitive advantages of having a professional and active digital presence are many. First of all we can mention the greater reach that your products and services can have, your target audience will multiply exponentially and therefore your possibility of conversions. Secondly, the possibility of competing with the largest and most consolidated enterprises and equal conditions by having a well-designed and attractive website. Thirdly, allow users to place orders 24 hours a day, 365 days a year and from any computer or mobile device. Fourth is the professionalization of your image thanks to your website, blog and social networks and finally having a community of loyal users interested in the world of dogs at your entire disposal. What makes you opt for one product and not another? The decision, sometimes, comes because the packaging seems more striking with beautiful colors or tricky words that may not tell the whole truth. In recent times, many consumers are choosing to buy promising products. But the problem comes when you don’t know how to identify which product is better. And it is that the issue of misleading labeling has been present for quite some time. In fact, it is the brands themselves that confuse their own customers. Giving them wrong or exaggerated information about their own products. But, do you know what can be the solution to this aspect?

Here at floppyears they denounce the misleading labels on pet grooming products that some brands use to sell due to lack of regulations. With no government regulations on the pet grooming industry they review the product label so you can have a better idea of what is really in your pet’s products. Their goal is to make it easy for the general public to understand what’s in their pet’s products and bring awareness to the lack of regulations in the pet industry, because your pets deserve better.

How misleading labels destroying other sectors.

Current advertising and marketing can give false expectations in some food products at a nutritional level. The consumer can get confused and choose a product believing that it is healthy when in reality it is not. Nutrition experts seek to warn about this problem that concerns opaque advertising and misleading labeling.

An example may be the so-called “light” products, whether they are light in sugar or fat, but which, by consuming more, can eventually increase the risk of gaining weight. Other misleadingly labeled products are those that have the term “no added sugar”, such as fruit jams. But this does not mean that these products do not have sugar at the origin of their manufacture, in the case of jams, fruits naturally have sugar.

Another commonly used hook is the “fiber source” or “high fiber” hook. But these foods are not necessarily whole foods. If a product provides 3 grams of fiber it can already be advertised as a “source of fiber” and if it exceeds 6 grams as “high fiber content”. However, this does not guarantee that the product is whole, since the fiber may have been added later in the form of bran. For it to be a truly integral product, it has to be made from whole wheat flour. This can be confirmed by reading the ingredient list. In order not to get carried away by false promises, the important thing is to have the habit of looking at the fine print, that is, the list of ingredients and knowing how to decipher it, knowing that it is always presented in descending order, that is, the first ingredient mentioned is the most important in quantity.